In the middle of the capital stands the Royal Palace Amsterdam, King Willem-Alexander’s official reception palace. The Palace plays a major role during state visits, but also other royal occasions, such as New Year’s receptions, gala dinners and award ceremonies. In addition, the Palace is open to visitors as much as possible. A living building where you can follow in the footsteps of royal guests through its imposing rooms and halls.

The Royal Palace Amsterdam is used for official events  by the Dutch Head of State, King Willem-Alexander. The most extraordinary and important of the receptions which take place there are state visits. 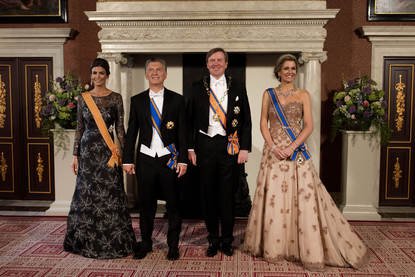 A state visit takes place when the King invites a foreign head of state to visit the Netherlands. This visit follows a fixed programme. On the first day, the visiting head of state inspects the military honour guard on Dam Square, accompanied by the King, and lays a wreath by the National Monument. In the evening, there is a state banquet – a dinner in full gala dress – in the Citizen’s Hall of the Palace.

During the days that follow, the King and Queen take their guests on visits in the country.

The visiting head of state stays overnight in the Palace with his or her retinue. Much work goes into getting the whole building ready to receive guests. In order to get everything ready on time, the building is closed to the public in the weeks leading up to the state visit.